Linfa is a project that starts from the rediscovery of the Poggio all’Olmo Nature Reserve and focuses on the combination of art, nature and science through the organization of an international festival to relaunch tourism and the economic activities of the entire area of ‘Amiata and the surrounding villages.

The event was held at the Borgo di Monticello Amiata (Gr) from 8 July to 11 July 2021 in a 4 days of street art, exhibitions, installations and performances in search of new forms of experimentation and action, in a ” slow ”which triggered an organic and natural movement of people in the various diffused points of the village.

The main action was focused on the relationship between man and the environment, with the aim of raising public awareness of respect for and protection of the environment, rediscovering the beneficial effects of being in contact with nature and overturning the anthropocentric perspective of the world through a new circular vision of life in which man does not place himself at the top of the hierarchy of the living but becomes part of the Whole.

A path has been created inside the village allowing visitors to stroll along the streets of Monticello and interact with the artists by coming into contact with the music, performances, theater, installations, exhibitions and the various contents of the Festival.

Three permanent interventions were carried out by the artists Millo, Orodè Deoro and Dario Giancane aimed at the redevelopment of public spaces that were in a state of decay and in need of transformation. These three permanent actions have triggered an urban, cultural and social regeneration of the places, transforming them into convivial and attractive spaces for residents and tourists.

Among the many artists involved, the name of the world-famous British sculptor Emily Young stands out. 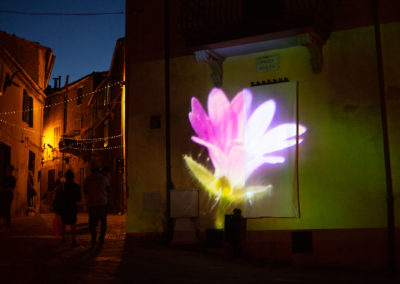